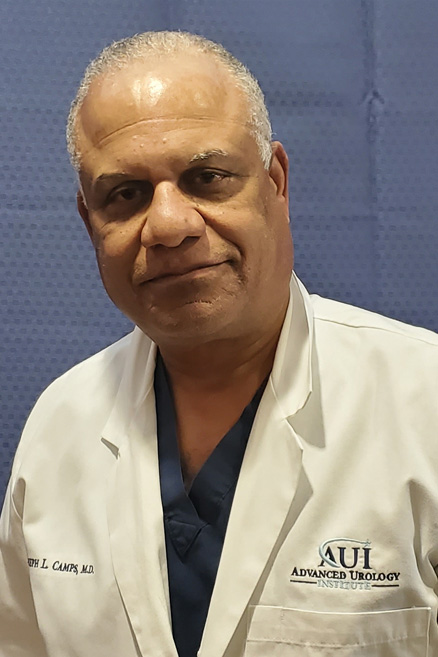 Joseph L. Camps, Jr., M.D., F.A.C.S. is a native Floridian. After growing up in Gainesville, he graduated with a bachelor’s degree in biology from Florida State University in 1978. He received his medical degree from the University of Florida College of Medicine in 1982. While serving his residency at the University of North Carolina at Chapel Hill, he was named Chief Resident in 1987. Dr. Camps continued his education and was honored with a fellowship in Urological Oncology at the M.D. Anderson Cancer Center in Texas. In 1988, he was recognized with the Nathan A. Womack Scholarship Award as Outstanding Surgical Chief at the University of North Carolina’s Department of Surgery, and in the same year received the University of Texas Cancer Foundation Award at the M.D. Anderson Cancer Center.

Dr. Camps has been practicing medicine in Tallahassee since 1990. He has served as the Chief of Staff and Chairman of the Department of Surgery at Capital Regional Medical Center, as well as Chairman of the Cancer Committee at Tallahassee Memorial Hospital. He has also served as Chief of Staff at Tallahassee Memorial Hospital and is currently on the Board of Directors. Dr. Camps’ leadership qualities extend beyond the field of medicine. He is currently a member of the Board of Directors of Premier Bank of Tallahassee. In addition, he served as the 1997-1998 Chairman of the Seminole Boosters Executive Board. He is currently a urologist in Perry, FL and Tallahassee, FL. In 1976, he led the Florida State Seminoles as captain of the football team. Dr. Camps and his wife, Marion, have two sons and a daughter. As a family, they are active in the Church of Christ, and enjoy fishing and many other outdoor activities together.

He was my sons Dr, and he is a very good one. I highly recommend him

I had an enlarged prostate at 62 years old and he went and reduced the size of my prostate but because he is an outstanding doctor he also checked my balder and what he found was a growth just starting. He took it out had it analyzed and it came back cancer. Since it was just starting I had no treatment but he checked me every three months for the first year and every six months for the next ten years and now yearly. At 80 I have no cancer and I can not thank him enough for his great attitude

Dr. Camps is a well trained Urologist, with a Fellowship in Urologic Oncology. He saved my life from early bladder cancer. He is kind, understanding and a good listener. A very talented and considerate doctor, who explains treatment and prognosis.