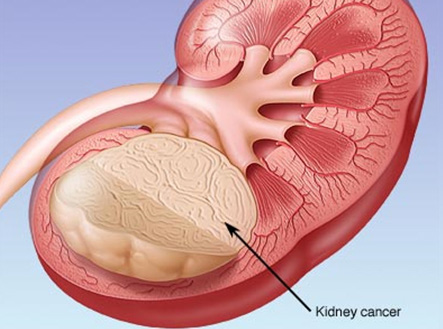 When cancer cells of any type are found within the kidney, it is commonly called kidney cancer. Renal Cell Carcinoma is the most common type of kidney cancer and it accounts for more than 90% of malignant kidney tumors. Like all cancers, renal cell carcinoma begins small and grows larger over time. Some renal cell carcinomas are noticed only after they have become quite large; most are found before they metastasize (spread) to other organs through the bloodstream or lymph vessels. Renal cell cancers are usually graded on a scale of 1 through 4. Grade 1 renal cell cancers have cell nuclei that differ very little from normal kidney cell nuclei. These cancers usually grow and spread slowly and tend to have a good outlook (prognosis). At the other extreme, grade 4 renal cell cancer nuclei look quite different from normal kidney cell nuclei and have a worse prognosis.

Many cases of renal cell carcinoma can be prevented by following some healthier guidelines for living, such as not smoking, since cigarettes are responsible for a large percentage of cases. Many of the cancer-causing chemicals in tobacco smoke are absorbed into the bloodstream by the lungs. Because the kidneys filter this blood, harmful chemicals can become highly concentrated in the kidneys. Several of these chemicals are known to damage kidney cell DNA in ways that can cause the normal cells to become cancerous cells. Workplace exposure to large amounts of hazardous substances such as cadmium, asbestos, and organic solvents can also increase your risk for renal cell cancer. Hypertension (high blood pressure) raises the risk level of developing kidney cancer, but it is not certain whether the risk is higher due to the medication needed to lower the pressure or the actual disease. In any event, medication should not be stopped to avoid the possibility of a risk factor. It is known that obesity alters the body’s hormonal balance, which controls the growth (both normal and abnormal) of many different tissues in the body, including kidney tissue. A healthy diet and exercise will not only afford the body the nutrients and oxygen to function more efficiently, it can offset the tendency to become obese as well as lower the blood pressure naturally.

Early kidney cancers do not usually cause any signs or symptoms, but larger ones do. Some possible signs may include:

The process begins with the doctor taking a complete medical history to check for risk factors and symptoms, followed by a physical exam which can provide signs of kidney cancer such as a tumor. Unlike most other cancers, kidney cancer can often be diagnosed without the need for a biopsy, but the following tests may be included in the investigative process:

There are many options available to patients diagnosed with early and advanced kidney cancer. The doctor will discuss the best possibilities with each patient before they decide, together, on a course of action. Treatment may include: