What is Prostate Enlargement? 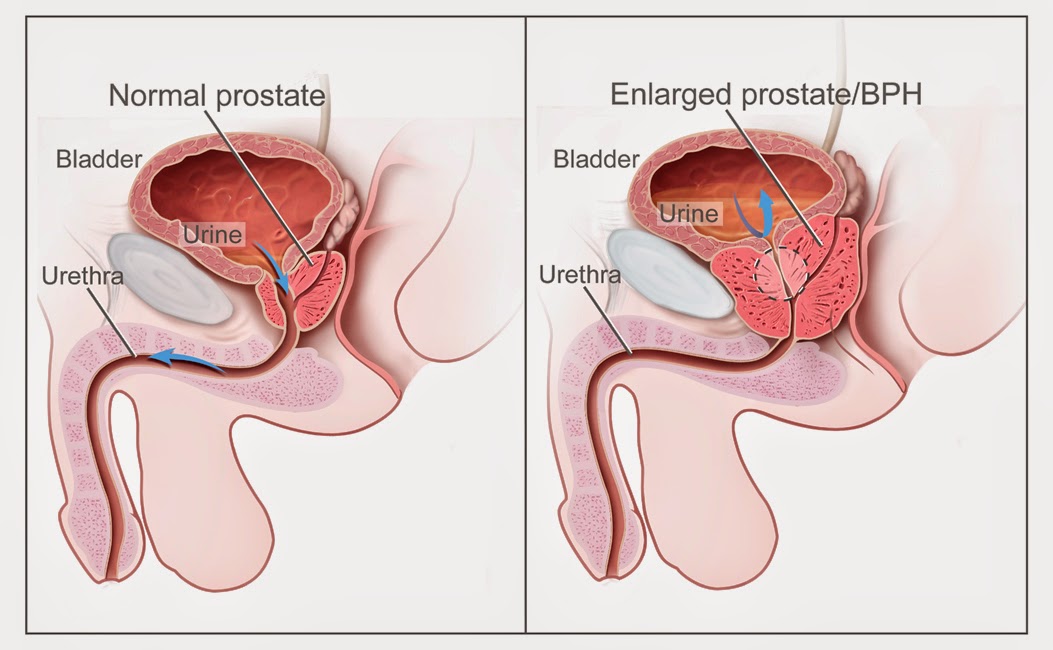 The prostate is a gland of the male reproductive system that is located underneath the bladder. It is about the size of a chestnut and its function is to produce the fluid that carries sperm during ejaculation. Because it covers the urethra and grows in size as a man ages, it can eventually cause problems with urination. This process of noncancerous growth is called Benign Prostate Hyperplasia (BPH) and is more commonly known as Prostate Enlargement. As the prostate gland increases in size, it puts pressure on the neighboring organs, especially the urethra, resulting in the constriction of the urethra and interrupted flow of urine through the passage. Symptoms include a delayed start of urination, urinating frequently at night, difficulty in urinating, a strong urge to urinate and incontinence. The actual changes in the prostate may start as early as age 30 and take place very gradually so that significant enlargement and symptoms do not usually appear until after age 50. The likelihood of the prostate enlarging and causing urinary symptoms becomes progressively greater with age.

What are the causes of Prostate Enlargement?

Studies show that when the male hormone testosterone reaches the prostate in large amounts, it increases the speed of production of prostate cells and promotes the gland’s enlargement. Results of these studies tell us that BPH is caused by the defective functioning of valves in the internal spermatic veins, manifesting as varicocele, a phenomenon which has been shown to increase rapidly with age.

What are the symptoms of Prostate Enlargement?

What are the risks of Prostate Enlargement?

If a man strongly forces urination, it may damage and rapture small veins in the bladder wall and urethra, causing blood to be present in the urine. If the urinary tract becomes blocked, the urine accumulating in the bladder may cause discomfort, a condition called acute urinary retention. Urine that becomes trapped in the bladder can lead to infection, the signs of which are soreness during urination and fever.

How to Treat Prostate Enlargement

Depending on the severity of the enlargement, the first approach will be to use pharmaceutical drugs. A type of drug called “alpha-adrenergic blockers” has phenoxybenzamine and doxazosin to relax the muscles of the bladder and urethra. It can restore the regular flow of urine but does not prevent the prostate from enlarging. Some drugs do shrink the prostate gland and may delay the need for surgery. Other medications may include antibiotics for infections or pain reliever for the pain.
When a prescription is not effective, a method called transurethral needle ablation may be applied. Using local anesthesia, a needle is inserted into the prostate and radiofrequency energy is applied to eradicate the tissue blocking the flow of urine. Another approach is microwave hyperthermia using a device named the Prostatron to emit microwave energy to the prostate through a catheter.
One operation commonly used for treating prostate enlargement for some time has been the transurethral resection of the prostate. Using general or spinal anesthesia, a cystoscope is inserted through the urethra and prostate tissue surrounding the urethra is removed using a surgical instrument. The small pieces of prostate tissue are removed from the body through the cystoscope. Normally, there is some blood in the urine following the procedure.

You may contact us and schedule an appointment to learn more about your options for treating prostate enlargement.