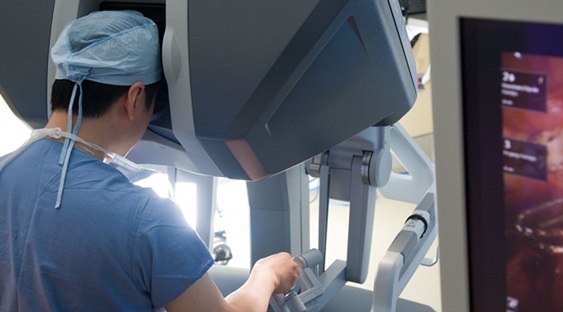 The robotic surgery capability provided by the da Vinci system offers several advantages over the traditional laparoscopic surgical method of treating prostate cancer when objectively compared in the following areas:

The da Vinci robotic surgery system is able to provide superior clinical results when compared to non-robotic traditional and scope-assisted procedures. This is because the da Vinci system’s Surgeon Console is equipped to provide the surgeon with a revolutionary, three-dimensional, multi-level magnification spectrum. More traditional scope-assisted surgery typically provides a much lower resolution image, and a far more limited field of vision. Furthermore, the da Vinci system’s sensitive electronics and one centimeter diameter surgical arms allow the surgeon to make highly precise movements inside the incision. This means that the malignant tissue can be removed with an efficiency and ease unheard of prior to the era of robotic surgery. This greater precision reduces the likelihood of relapse due to missed cancerous tissue. The precision of the da Vinci system also allows the surgeon to avoid damaging healthy prostate tissue, which improves clinical results, reduces scar tissue build up, and contributes to an overall shorter recovery period.

Surgery is an inherently risky medical procedure. However, for the treatment of cancer, surgical options can be the most effective choice in eradicating the malignant tumors without the painful side effects of chemotherapy and radiation therapy. Among the more serious risks associated with surgical treatment is the possibility of infection at the incision site(s). Such infections are often the primary cause of serious complications which may hamper a quick and uneventful recovery. The da Vinci system greatly mitigates the risk of infection in a number of ways. First, the size of the incision(s) is significantly smaller with robotic surgery than with the traditional procedure. A standard, non-robotic prostatectomy requires a six- to eight-inch vertical incision to the abdomen. A large, open incision increases the patient’s susceptibility to bacterial infection during and after the surgery. Post-operative infections are more common than intra-operative infections, as hospital rooms are not maintained at the same level of sterility which operating rooms are. The da Vinci robotic surgical system utilizes a much less invasive technique requiring four to five small incisions, each less than two inches. These smaller incisions will heal significantly faster than the large incision needed in traditional surgery.

When a physician determines surgery is the best treatment option, da Vinci’s robotic technology optimizes the chances of a quicker recovery time as opposed to traditional surgical prostatectomy. The smaller incisions required to maneuver the operating arms heal much faster, require fewer sutures and, therefore, are less vulnerable to tearing or infection. The precise movements of the robotic arms allow a more targeted approach for cleaner removal of malignant tissue and reduces damage to healthy tissue during the operation. The operating arms of the da Vinci Surgical System are designed to avoid contact between the operating instruments and the walls of the incision. All of these advantages translate to a speedier and less worrisome recovery period.

The sheer size of the incision needed for a traditional prostatectomy produces significant scarring in the patient’s lower abdomen. The robotic prostatectomy procedure leaves incisions which heal with little or no visible scarring. In addition to the obvious aesthetic value, minimizing scar tissue on the interior walls of the incision promotes better healing. Excess scar tissue build-up can sometimes interfere with the proper function of the prostate. Although such a complication is rare, it’s worth considering when exploring treatment options. The precision of robotic surgery offers an inherent solution to this potential difficulty. By minimizing the size of the incision needed to remove cancerous tissue, the risk of scar tissue-related complications is greatly mitigated.