What Does the Prostate Gland Do?

The prostate, found only in men, is a tiny, walnut-sized muscular gland in front of the rectum and just below the bladder. It surrounds the urethra, which transports urine to the penis from the bladder, and is essential for the normal functioning of the male genitourinary system. The prostate makes prostatic fluid, which forms a substantial portion of semen. During ejaculation the prostate contracts and closes off the opening between the urethra and bladder, ensuring that prostatic fluid squirts into the urethra and semen is pushed out at speed.

So what does the prostate do?

The prostate is not an essential organ for life, but it’s quite crucial for reproduction. It plays an active part in reproduction by secreting the prostatic fluid, which forms part of healthy semen — the perfect environment for the transit and survival of sperm. Healthy semen includes the enzyme PSA (often measured during screening for prostate cancer), together with other substances secreted in the prostate and seminal vesicles, such as citrate, zinc and fructose, which supply sperm with the energy to travel to the egg. There are also various antibodies in semen to protect sperm and the urinary tract from bacteria and different pathogens.

What are the constituents of prostatic fluid?

The prostate secretes a milky fluid, the prostatic fluid, which makes up about 30 percent of the total fluid that’s ejaculated. The prostatic fluid contains various ingredients, such as enzymes, citric acid and zinc, which keeps sperm alive and protects them and the genetic codes they carry. PSA (prostate-specific antigen) is one of the enzymes in the fluid that, after ejaculation, makes semen runnier and helps sperm travel through semen more easily, which increases the likelihood of successful fertilization of an egg. While prostatic fluid is weakly acidic, the other constituents of semen turn it alkaline overall, which helps to counteract vaginal acidity and prevent damage of sperm.

Growth of the prostate

The prostate grows bigger as men age. Typically the prostate undergoes growth during adolescence driven by the male hormone, testosterone, and the hormone’s byproduct, dihydrotestosterone (DHT). Testosterone hormone is primarily produced in the testes, but smaller quantities also can be secreted in the adrenal glands found just above the kidneys. By the age of 40 the prostate might have grown from a walnut-sized to apricot-sized gland. And by the age of 60 it might have reached the size of a lemon.

While the prostate is strategically located to deliver the prostatic fluid and squeeze things along during ejaculation, its position around the urethra makes it a liability when it grows or gets bigger. A swollen prostate will compress the urethra and irritate the walls of the bladder, resulting in interference with normal urine flow. In fact, over 50 percent of all men in their 60s have symptoms of prostate enlargement, a condition called benign prostatic hyperplasia (BPH). And by the age of 70 to 80, a man’s risk of BPH increases to 90 percent, with symptoms such as leaking or dribbling urine, frequent urination, weak or stuttered urine stream.

While the size of your prostate will not always influence how severe the obstruction or symptoms are, BPH can cause serious complications over time, such as urinary tract infections, bladder damage, kidney damage, incontinence and bladder stones, due to bladder strain and urinary retention. So it’s important to see a urologist as soon as you have urinary issues so BPH can be detected early and treated.

Another health problem associated with the prostate is prostate cancer, which is the most frequent cancer in men. It occurs in 1 out of 7 men over their lifetime, and more than 200,000 men are diagnosed with the cancer annually. Prostate cancer is frequent in men age 50 and older, but the largest number of cases is found in men 70 to 80 years old. About 3.8 percent of men diagnosed with the cancer die of the disease, while 7 in 10 newly diagnosed patients currently survive past 5 years. As doctors, our role is to screen for the cancer, detect aggressive forms early and prevent any problems that may occur due to obstruction.

So what’s your role? 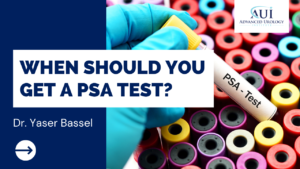 When Should You Get a PSA Test – Dr. Yaser Bassel 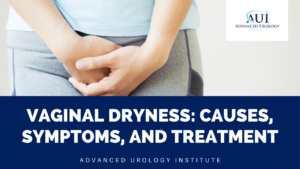 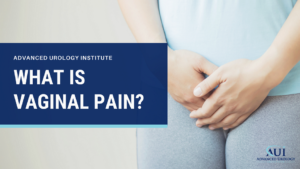 What is vaginal pain?