Symptoms and Types of Kidney Stones 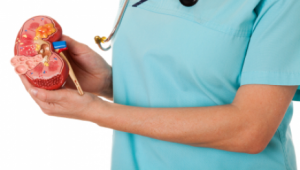 Kidney stones, also known as renal calculi, are concretized solids or crystal aggregations that form in kidneys due to dietary minerals that are contained in urine. Various types of kidney stones are classified by urologists based on their location inside the kidney and their chemical composition. In terms of chemical composition, the stones are classified as calcium stones, uric acid stones, struvite stones and others. Over 80-percent of all types of kidney stones occur in men.

Calcium stones typically contain calcium oxalate alone or in combination with brushite or apatite forms of calcium phosphate. Calcium oxalate stones are the most common form of kidney stones affecting men in all parts of the world, and their formation is related to renal tubular acidosis, hyperparathyroidism and primary hyperoxaluria, all of which are conditions responsible for the precipitation of oxalate and calcium phosphate crystals. Patients with various kinds of gastrointestinal disorders, such as inflammatory bowel disease, are prone to Oxaluria. Consumption of high amounts of oxalates in nuts and vegetables and the resection of small bowels are also common causes of calcium stones.

Struvite stones, also called infection or urease stones, are primarily composed of struvite. They occur concurrently with bacterial infections because the organisms will metabolize urea to produce carbon dioxide and ammonia, which in turn makes urine more alkaline and favorable for the precipitation of struvite. These stones commonly occur in people with spinal cord injuries, neurogenic bladders, obstructive uropathies, idiopathic hypercalciuria and vesico-ureteral reflux disease. Uric acid stones occur in people with various metabolic abnormalities, such as obesity, excessive uric acid in urine, excess uric acid in serum, and low PH of urine. Other stones also exist, including cystine stones in people with metabolic errors and xanthine stones in people with xanthonuria.

The presence of kidney stones is usually felt in the obstruction of the renal pelvis and the ureter, causing the subsequent occurrence of excruciating and intermittent pain radiating to the inner thigh, the genital area, the groin region and the flank. Pain caused by kidney stones, also known as renal colic, is described by medical experts as the strongest pain sensations known. When experiencing renal colic, the patients also have a number of symptoms such as hematuria, restlessness, urinary urgency, nausea, sweating, and even vomiting. The pain comes in waves of 20-60 minutes in length.