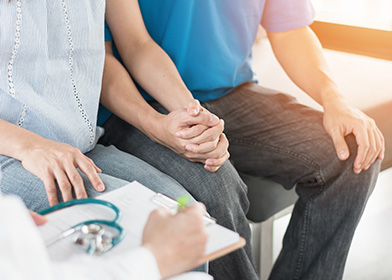 Infertility is the inability to conceive after at least one year of unprotected intercourse. Since most people are able to conceive within this time, physicians recommend that couples unable to do so be assessed for fertility problems. In men, hormone disorders, illness, reproductive anatomy trauma and obstruction, and sexual dysfunction can temporarily or permanently affect sperm and prevent conception. Some disorders become more difficult to treat the longer they persist without treatment.

Sperm development (spermatogenesis) takes place in the ducts (seminiferous tubules) of the testes. Cell division produces mature sperm cells (spermatozoa) that contain one-half of a man’s genetic code. Each spermatogenesis cycle consists of six stages and takes about 16 days to complete. Approximately five cycles, or 2 months, are needed to produce one mature sperm. Energy-generating organelles (mitochondria) inside each sperm power its tail (flagellum) so that it can swim to the female egg once inside the vagina. Sperm development is ultimately controlled by the endocrine (hormonal) system that comprises the hypothalamic-pituitary-gonadal axis.

Because sperm development takes over 2 months, illness that was present during the first cycle may affect mature sperm, regardless of a man’s health at the time of examination.

According to the National Institutes of Health, male infertility is involved in approximately 40% of the 2.6 million infertile married couples in the United States. One- half of these men experience irreversible infertility and cannot father children, and a small number of these cases are caused by a treatable medical condition. Numerous congenital and acquired conditions affecting the testicles can affect their ability to produce sperm, such as a history of un-descended testicle(s) at birth, injury to the testicle(s), exposure to certain chemicals or drugs, or genetic diseases. Blockage of the flow of sperm from the testicle(s), to the urethra or the blockage or inadequate production of sperm or other semen products can be the cause of infertility.

Our physicians will start with a detailed patient history and physical examination along with two or three properly collected semen analysis is the initial work-up. This is typically followed by certain x-ray studies, such as testicular and/or prostate ultrasound, sperm duct flow x-rays, or testicular biopsy.